Besides your ability to create compelling art, a viable sizable mailing list is your best asset. Since Web hosting costs are nominal making high quality downloads of digitized art nearly free to distribute, I can see value in finding a way to bring to fruition futurist Marshall McLuhan’s timeless maxim, The Medium is the Massage. 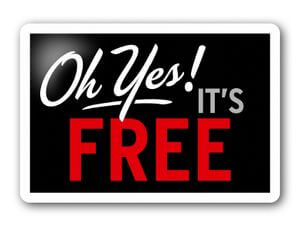 Yesterday, I retweeted an article from ArtDaily.org. Its title, 50 Acclaimed Artists Give Away their Works for Free in the Last Ever Free Art Fair is a grabber. The idea gives one pause to contemplate fine art should be something greater than the product it becomes in commercial art fairs. I like the thought on any meaning you can take from it.

The show is aimed at taking art out of the commercial realm, at least for the moment, so it might be appreciated for the sheer beauty, imagination or message the artist intended rather than assigning it a dollar value. The goal, like timeless great art, is noble and is a concept all but the most cynical mercenary souls surely can value.

The Times They Are A Changing

Whatever your feelings, the notion of free, or giving something of value away, spotlights one of the fundamental, monumental paradigm shifts we, as a society of consumers, are experiencing. That is, we’ve come to expect, damn near demand, things be free. This is exemplified by the oft-repeated phrase, “Information wants to be free.” The aphorism’s genesis, pursued by Aussie scholar, Roger Clarke, makes for interesting reading on its own.

The simple truth is you can’t separate art from commerce, even when you give it away. This is the point of the aforementioned paradigm shift. Artists are being shown they can give away their art and leverage the response to the offer to gain an audience and create a cash flow in some other ways. This requires getting out of one’s way and accepting things are different.

Get on Board with the Band(s)

The music business offers the best example of how this works. The Grateful Dead’s practice of freely allowing, even facilitating, taping of their live shows fostered the trend. Rather than destroying their business model, it nourished a steady and impressive revenue stream for the band from other sources. It has since become a path well-trod by many recording artists.

The idea, like The Grateful Dead, was radical, rebellious and well ahead of its time. The Dead’s way of doing things foretold the future as their “far out” model became a widely used practice. For example, here’s a paragraph from a lengthy Art Print Issues post from the fall of 2007:

We need to start looking at new ways of doing things. I had a blog post a while back titled, “Prince and the Art of Monetizing Free Stuff.” It described how he gave away 3 million copies of his new CD in England through newspaper inserts and more than made it up on concert ticket and merchandise sales.

The band, Radiohead, which currently is perhaps the best band in the business, is selling its latest album exclusively through its Web site rather than through traditional distribution channels, i.e, record companies, Wal-mart, iTunes, etc.

What make things far more interesting, the band is letting its fans choose the price they wish to pay for the download. Yep, you can pay nada, zip, zilch if you so choose. You can be sure players from every aspect of the industry are watching to see how this paradigm shift plays out. (Ed. note 9/14/09 The group abandoned the experiment after distributing millions of downloads. Whatever the cost, the publicity value had to make up for any shortfall.)

There Are Some Free Thinking Visual Artists Tossing Breadcrumbs

I recently tweeted this article: Surviving and Thriving as an Artist and I commend it to you again here. The author, Spryos Heniadis, is a visual artist who references Trent Reznor, yet another cutting edge recording artist who touts the practice of giving away high-quality mp3 downloads of music as the basis for building an audience, and thus a business. Heniadis has given the idea serious thought and has proposed a unique multi-part program to put the idea of building his own clientele by giving away his art. See if you can follow his logic, or improve upon it.

The debate over “Free” has Spilled into Business Headlines and Blogs

There is an ongoing debate about the real value of free by some notable marketing and trendspotting heavyweights. Chris Anderson is the editor of Wired magazine. He has written a book titled, Free: The Future of a Radical Price

. It has spawned a debate between Seth Godin and Malcolm Gladwell who are two of the most influential authors on business and marketing these days. They don’t agree at all. Just Google these three words: free godin gladwell. The results will bring you up-to-date on the debate.

I have written about how well-known visual artists such as Hazel Dooney and Banksy have been giving downloads of their art away. In an Absolute Arts guest blogger post titled Art Vs. Marketing – Making Hazel Dooney Cringe, I took Dooney to task more to make a point than pick on her. Besides that she is controversial and makes great copy, one can read her Self Vs. Self blog and know she is capable of taking and giving a jab with ease.

In this case, she took good-natured umbrage at my suggestion her free downloads were smart stealth marketing with a retort titled: Google-eyed. Dooney is far from being naive, she understands it takes presence and awareness to make art important, and to sell it. To wit, she describes herself as a total media tart who takes any opportunity to promote her art and herself.

That she is smart enough to freely give her art away while taking its creation and the meaning behind with serious intent puts her full square with the organizers of the Last Free Art Fair mentioned in the first paragraph above. It also means she is understands and is running well ahead of the paradigm shift described in Free: The Future of a Radical Price

. She gets it and uses it to her advantage. Bully for her.

Take Advantage of Low-cost Production & Distribution to Build Your List

As always for success, possessing the ability to create compelling art is essential. However in this new economy, compiling a sizable and viable emailing list arguably is your best asset when it comes to getting your art to market . Since Web hosting costs are nominal, it makes high quality downloads of available and previously amortized digitized art nearly free to distribute. Doing this brings to fruition visionary Marshall McLuhan’s timeless maxim, The Medium is the Massage

. He presciently wrote this book in 1967 and it remains a top seller and more relevant today than then.

I am not advocating giving away stuff to cost you money. I am advocating giving away stuff to make you money. If your emailing list were 10x, or 100x, or 1000x, or 10,000x larger than it is, you must agree you could leverage it to promote your art and yourself. I believe the results you would achieve would be far greater than you can imagine reading this post.

That’s What I’m Talkin’ About!

Let the idea of your very own large email list marinate. Then ask yourself what is keeping you from getting your hands on one.  When you come to realize it simply is not already having employed a well-executed plan, I trust you will be motivated to act on it.

What Does Living the Artist’s Life Mean and How Are You Doing?

What Does Living the Artist’s Life Mean and How Are You Doing?